by
chris
My articles My booksMy videos
Follow on:
Summary:
Everybody knows that the housing market has become financialized, as Josh Ryan-Collins among others has documented. But what kind of financial asset is housing? The answer is far from straightforward. In one sense, house prices are like share prices. Both are claims upon future incomes – profits in the case of equities and wages in the case of houses (it’s fair to assume rents are a stable fraction of wages). Both tend to fall in recessions. And both have over the years delivered a risk premium – though how great depends upon which time period you use, how you account for liquidity risk and so on. But there’s a massive difference between house prices and share prices. Since the mid-90s house price valuations have soared. In 1998 the average house prices was 3.1x the income of

chris writes The decline of economics

The end of evidence-based centrism

The decline of economics

Everybody knows that the housing market has become financialized, as Josh Ryan-Collins among others has documented. But what kind of financial asset is housing? The answer is far from straightforward.

In one sense, house prices are like share prices. Both are claims upon future incomes – profits in the case of equities and wages in the case of houses (it’s fair to assume rents are a stable fraction of wages). Both tend to fall in recessions. And both have over the years delivered a risk premium – though how great depends upon which time period you use, how you account for liquidity risk and so on.

But there’s a massive difference between house prices and share prices.

Since the mid-90s house price valuations have soared. In 1998 the average house prices was 3.1x the income of first-time buyers according to the Nationwide. Today it is 6.7x. Equity valuations however (at least in the UK) have not much changed in this time. The ratio of the All-share index to dividends or earnings is much the same as it was in 1997-98. In this sense, house prices have behaved far more like bonds than equities: they have risen as interest rates have fallen whereas share prices have not. 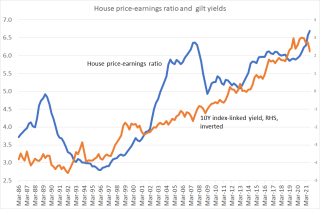 There’s an obvious explanation for this. Lower real interest rates raise the net present value of future rents (or of rents saved if you are an owner-occupier) so they raise house prices. As Bank of England economists say: “the rise in real house prices since 2000 can be explained almost entirely by lower interest rates.” My chart shows that there’s a huge correlation between the house price-earnings ratio and the ten-year index-linked yield. House prices, then, have behaved like bond prices. And if it walks like a duck and quacks like a duck…

In theory of course, a lower discount rate should have also raised share prices. I suspect it hasn’t because the same stagnation and risk aversion that’s pushed bond yields down has depressed expectations for dividend growth and increased the risk premium investors demand on equities.

But why haven’t these same factors also depressed house prices? Surely increased risk and the prospect of lower rental growth should be bad for them?

One way in which this is true is that protects us from future rises in rents: the demand for owner-occupation is a demand for rent control. Also, as Cristian Badarinza and Tarun Ramadorai have shown, foreign investors have regarded the London housing market as a safe haven (pdf) from economic and political risk – just as they regard western bonds.

What’s more, for many of us our house is not wealth so we shouldn’t care if its price falls. And an asset whose price fall doesn’t bother us is similar to one whose price doesn’t fall in the first place.

Put it this way. I grow a lot of kale in my garden, so I never need buy any from the shops. The price of kale therefore doesn’t bother me. If it falls I’m worse off as a kale-grower but better off as a kale-consumer to exactly the same extent. The net impact is zero. As an owner-occupier I’m in the same position. I’m providing housing services to myself. A rising cost of those services benefits me as a supplier and makes me worse off as a consumer with no net effect. As Mervyn King said (pdf) back in 1998:

A rise in house prices leads not only to an increase in wealth but also to an increase in the cost of housing services. Or, to put it another way, if the price of your home goes up, you will not be able to spend more on other things if you wish to carry on living in your home.

This shows that housing like a bond in another sense. A rise in bond prices is ambiguous for bond-holders. Yes, it makes them better off in the sense that their assets are worth more. But it makes them worse off in that they will have to pay more in future to obtain a given income: “higher bond prices” is another way of saying “lower annuity rates”. For many, the net impact is zero.

Obviously, this is not true for everybody. If you are a landlord or someone planning on trading down – that is, on consuming less housing services in future – rising house prices do make you better off.

Such people, though, are a minority. Atif Mian and Amir Sufi estimate that the boom in housing transactions in the US during the bubble of the mid-00s was driven by the 1% of people who bought and sold many houses quickly. The vast majority didn’t behave as speculators – but as Ulrike Malmendier and Adam Szeidl show (pdf) bubbles are generated by minority behaviour.

But for everybody who is long of housing, somebody else is short such as younger people wanting to buy a home. Net, as Willem Buiter pointed out, housing is not net wealth (pdf).

If all this is right, it has an encouraging implication. It suggests that measures to definancialize the housing market such as credit controls, curbs on speculation or land value taxes are – from an economic point of view – a free hit. They would reduce the economic harms done by high house prices such as increased instability (pdf); lower productivity (due in part to encouraging longer commutes); and greater labour market frictions – not to mention the cultural and psychological damage they do. And they’d do so at very little cost: if house prices aren’t net wealth, cuts in them don’t matter.

This is not to say the job is politically easy: the tiny minority for whom house prices are wealth would resist such measures, and it is they who control politics. The point is, though, that what we have here is an obvious cost-benefit win.

But is it right? There’s a different explanation for the contrast between bond and equity behaviour in the face of falling interest rates.

It’s possible that housing speculators have priced in the good news of lower bond yields (a lower discount rate) but not the bad, that they betoken stagnation.

There’s a sort of precedent for this. Back in 1979 Franco Modigliani and Richard Cohn argued that shares had fallen in the 70s because they were only half reacting (pdf) to higher inflation: they were taking on the bad news of higher interest rates and hence discount rates but not the good, that inflation would raise future earnings. Maybe the housing market is also doing some half-pricing in – taking on the good news of lower interest rates whilst ignoring what those lower rates symptomize.

If this is the case (and I don’t know if it is) then prices should eventually fall of the own accord. In which case we don’t need policy to definancialize housing: the market will do it anyway.

My articlesMy books
Follow on:
Previous Skill as a social construct
Next Productivity in late capitalism