by
chris
My articles My booksMy videos
Follow on:
Summary:
In the debate about whether inflation will rise significantly, there’s one point which seems to me to be under-rated – that it is those who have most confidence in a market economy who should be most relaxed. What I mean is that, so far, the threat of rising prices in the UK is a localized one, confined to a few pockets. The NIESR estimates that trimmed mean inflation (which excludes 5% of the highest and lowest price changes) is still lower than it was in October 2020 and is much lower than it was in 2017. And labour shortages are so far confined to a few sectors such as fruit-picking, lorry driving, construction and hospitality. Lloyds Bank says that almost a fifth of firms have difficulties hiring the right staff – which mean that four-fifths have not. Yes, annual wage inflation is

In the debate about whether inflation will rise significantly, there’s one point which seems to me to be under-rated – that it is those who have most confidence in a market economy who should be most relaxed.

What I mean is that, so far, the threat of rising prices in the UK is a localized one, confined to a few pockets. The NIESR estimates that trimmed mean inflation (which excludes 5% of the highest and lowest price changes) is still lower than it was in October 2020 and is much lower than it was in 2017. And labour shortages are so far confined to a few sectors such as fruit-picking, lorry driving, construction and hospitality. Lloyds Bank says that almost a fifth of firms have difficulties hiring the right staff – which mean that four-fifths have not.

Yes, annual wage inflation is high. But this is partly because hours worked were unusually low a year ago (which dragged down weekly earnings then) and partly because of a compositional effect: it is the low-paid who have disproportionately lost their jobs, which has raised the average earnings of those in work in the same way that shooting the wounded raises the average health of an army. Both these effects will fade over time.

In fact, the big picture is that the labour market, as the Resolution Foundation reports, “is very far from tight.” Total hours worked, for example, are still 7.6% below their peak and the official unemployment rate is 4.7%. Though much less than feared, this is above its 2017-2019 level – a period when CPI inflation trended down.

Which poses the question: how can a few shortages lead to generalized inflation? In his valedictory speech at the Bank of England, Andy Haldane claimed:

The laws of economic gravity mean the prices of goods, services and assets tend to rise, at first in a localised and seemingly temporary fashion, but increasingly in a generalised and persistent fashion.

But he doesn’t spell out the mechanism of this gravity, nor provide evidence for this.

And in fact, there is a countervailing mechanism which free marketeers in particular should be celebrating.

Quite simply, localised shortages and price rises should lead both to increases in supply - Bank Governor Andrew Bailey points to the example of US lumber prices which have halved since May as supply has risen – and to efforts to economize. Firms facing recruitment difficulties and rising wages could respond by using existing staff more efficiently; or by training unqualified workers; or by trying to recruit from other than their usual places; or changing shift patterns to make jobs more attractive; or (less likely perhaps) by substituting capital for labour. Failing all of that, they could push up prices, in which case customers will do the economizing for them.

The price mechanism, somehow, solves the problem of localized price rises. That’s the point of free markets. It’s not that they lead to Pareto-optimal equilibria – that’s just a lie we tell the kids – but that they are decentralized problem-solving technologies.

Of course, we outsiders don’t know exactly how each particular employer or customer will solve their particular problem. But that’s the point. As Hayek rightly said, the beauty of markets is that they deploy decentralized knowledge which the central planner (or economic forecaster) does not have.

These solutions aren’t instant of course: it takes time to find them. During this lag, average inflation might rise due to mismatches between the pattern of supply and demand. Eventually, though, the market should find some sort of answer.

If you have faith in market mechanisms, therefore, you shouldn’t be much worried by inflation generated by localized shortages.

From this perspective, it is leftists who should have higher inflation expectations than the right, as it is they generally who have less confidence in market forces.

But this, I sense, is the opposite of what we actually see. Why?

Instead, the obvious possibility is that inflation will be pushed up not by market failures but by policy failures.

Instead, one issue is the Bank of England’s money printing, thanks to which the M4 measure of the money stock has risen by 16.8% since the start of the pandemic.

But what’s the mechanism through which an increased money stock leads to higher inflation? It’s that people can as a result find themselves holding excess cash. And if they spend enough of this on goods and services, then demand will eventually outstrip supply and so we’ll see rises in the general price level. 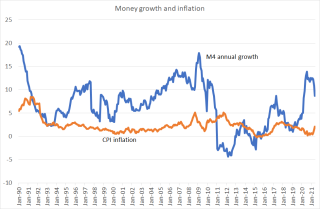 My chart, however, shows that whilst this is true to some extent, it is only weakly so. Yes, stronger money growth does lead to higher inflation but it takes big rises in it to generate moderate rises in inflation.

Which draws attention to the problem. Increases in M4 won’t lead to inflation if people are happy to hold the extra cash. What happened during the pandemic is that that the closure of shops, restaurants, pubs and hotels forced us to save more, much of which we held in our bank balances: QE was, in effect, the Bank accommodating this increased demand for money. The question is: to what extent will we spend this cash as the economy reopens?

Obviously, we will to some degree and have begun to do so. But on the other hand, we might have fallen into more frugal habits and so will maintain higher-than-normal cash balances: the dip in retail sales in May is consistent with this possibility. One’s view on this question must be lightly held (because we have no precedent) and largely independent of your opinions on other issues. It’s not good enough, therefore, to point to monetary growth and shriek “inflation”. You need to spell out the connections, from money to demand and from demand to inflation.

The latter draws our attention to where there might well have been a policy failure – on the supply-side. A lack of support for the self-employed has encouraged some to leave their industries, which could intensify shortages as demand picks up, whilst the hostile attitude to migrants will mean that fewer will come into the country to fill vacancies. In this sense, economic policy has perhaps been inflationary. Oddly, though, few on the right are keen to point this out.

I suspect, though, that there might be other reasons why the right fears inflation more than the left.

One is that if the Bank expects higher inflation to persist it will raise interest rates – and real interest rates. Although this would be good for savers, it would be bad for house prices. A lot of landlords would suffer.

Also, what bothers them is not so much general inflation as the possibility that some workers somewhere might get a better deal – not just higher wages but the chance to reject the worst jobs. In my formative years, the right were keen on market forces because they helped to put workers in their place. When those same forces threaten to improve workers’ conditions, free market ideas become less attractive. As Corey Robin has said, the one consistent theme on the right is “a desire to resist the liberation of marginal or powerless people.” Which is why even local and temporary labour shortages are so scary.

My articlesMy books
Follow on:
Previous Symptoms of stagnation
Next Dehistoricizing identity