by
chris
My articles My booksMy videos
Follow on:
Summary:
Many people believe we need to work less if we are to avoid catastrophic climate change. We must “dramatically reduce economic activity” says George Monbiot. “We should cut working hours to save the planet” agrees Simon Kuper. In truth, though, there are other reasons to work less, as Martin Hagglund argued in his brilliant This Life. Our most fundamental possession, he says, is time, and we can only be truly free if we can choose what to do with this scarce asset. For many of us, though, having to work long hours or for many years deprives us of this freedom. Which runs into the objection that working significantly less would be bad for the economy. Hagglund’s solution to this is ingenious. What we need, he says, is a “revaluation of value”. We must judge economic success not by how

chris writes The decline of economics

The end of evidence-based centrism

The decline of economics

Many people believe we need to work less if we are to avoid catastrophic climate change. We must “dramatically reduce economic activity” says George Monbiot. “We should cut working hours to save the planet” agrees Simon Kuper.

In truth, though, there are other reasons to work less, as Martin Hagglund argued in his brilliant This Life. Our most fundamental possession, he says, is time, and we can only be truly free if we can choose what to do with this scarce asset. For many of us, though, having to work long hours or for many years deprives us of this freedom.

Which runs into the objection that working significantly less would be bad for the economy.

Hagglund’s solution to this is ingenious. What we need, he says, is a “revaluation of value”. We must judge economic success not by how much we produce, but rather by how much free time we have:

To be wealthy is to be able to engage the question of what to do on Monday morning, rather than being forced to go to work in order to survive.

He believes such wealth – such freedom – is impossible under capitalism. Yes, capitalism tries to economise on labour. But it does do erratically and inequitably, by creating unemployment (with the misery it causes) alongside others who work too much. 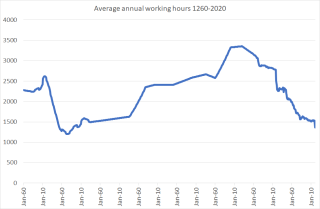 History suggests he has a point. Working hours increased markedly during the industrial revolution, as E.P. Thompson described (pdf). And whilst they’ve fallen since the late 19th century, the average working week is longer now than it was in the 15th century. (I'm using Bank of England data here.) What’s more, the pace of decline in working hours seems to have slowed. In the 30 years to 2019 they dropped less than 6%, compared to an 18% fall in the 1959-89 period: this fact might be connected to the weakening of trades unions in this time.

Of course, working hours are but one measure. By another, free time has increased hugely since the early 20th century because many of us are enjoying long retirements now. But progress here has stalled. The state pension age has risen, and young people – unable to save because of high rents - expect to work until they drop.

Which suggests Hagglund is right to say we need some radical economic changes if we are to increase free time.

Two other facts suggest as much.

One is that the smaller is the economy, the larger will be the share of government spending therein. If the economy shrinks spending on health and social care will not, so these will take up a bigger share of activity. Jason Hickel says that degrowth is compatible with increasing “people’s access to the resources they need to live long, healthy, flourishing lives.” But that means a big increase in the share of social spending in economic activity. Degrowth – for environmental or Hagglundian reasons – requires decommodification*.

The other is that whilst we wealthy people could easily work less and consume less, those who are working long hours just to get by cannot. One solution to this would be a cultural revalorization of work, to recognize the low-paid as being the skilled workers they in fact often are. But another would be greater redistribution, as Monbiot acknowledges.

The inference is clear: cutting working hours and output cannot be an isolated change. It requires other big cultural and economic changes.

Which runs into a problem: how would such changes affect productivity?

You might think this irrelevant for green degrowthers. I’m not sure. Even if we are shrinking GDP we need to improve energy efficiency. And Hagglund’s vision of more time increasing our freedom requires that productivity be high. The sooner we can get our work done the sooner we can knock off, and some of us will want to spend our freer time on some activities that consume resources.

But raising productivity is a massive task even in the best of times. It requires that we overcome not just vested interests but also Baumol’s law (it’s hard to raise productivity in many services), diminishing returns, and a lack of big innovations. Indeed, it might be that it’s impossible to do so, as productivity is determined by global factors rather than those under the influence of national governments.

And shrinking output and working hours would add to these obstacles.

For one thing, it would put us on the wrong side of Verdoorn’s law, the correlation between aggregate demand growth and productivity growth. If companies are to invest in energy or labour-saving technologies they need confidence that future demand will be sufficient to cover the cost of doing so. Degrowth reduces that confidence.

And for another, technical progress and innovation require competition: a lot of productivity growth comes not from incumbents upping their game, but from new entrants and exits (pdf). But degrowth increases the share of the social sector in GDP and shrinks the share of markets.

We mustn’t be wholly pessimistic, however. We’ve decent evidence (pdf) that cutting working hours – at least moderately – can raise productivity (pdf). And socialism could remove the barriers to productivity created by inequality and managerialism, not least by encouraging worker coops.

Nevertheless, all this leaves us with a big question: how to reconcile socialism with the competition necessary (but not sufficient!) to raise efficiency? This is made all the more difficult because nobody in British politics seems to be thinking about it*.

But there’s another issue here. Working significantly less is not a change in degree but one of kind. And it’s one many of us will struggle to adjust to. As Maynard Keynes wrote in a famous essay (pdf):

There is no country and no people, I think, who can look forward to the age of leisure and of abundance without a dread. For we have been trained too long to strive and not to enjoy.

Being free from work can mean being free from roles, from meaning: think of the ennui endured by the women in Jane Austen novels or housewives such as Betty Draper in the mid-20th century. I’ve a sense of this myself. I’m planning on retiring next year, but I approach this as my teenage self regarded beautiful girls – with desire mixed with fear.

I fear there’s a bigger danger. Recent years have confirmed what Benjamin Friedman wrote in 2006:

The history of each of the large Western democracies – America, Britain, France and Germany – is replete with instances in which [a] turn away from openness and tolerance, and often the weakening of democratic political institutions, followed in the wake of economic stagnation that diminished people’s confidence in a better future.

The biggest support for the Green party, remember, came in 1989 – at the peak of a boom.

Which provides another challenge for degrowthers: how to prevent lower GDP leading to reactionary politics?

If all this reads like a critique of degrowth, it shouldn’t. Rather, my scepticism is directed towards a particular type of politics – very often found among centrists as much as on the left - which I’ll call the “if I were king” conception. We should not think of policies as standalone interventions imposed from the top down. Instead, they are embedded in, and arise from, particular cultures and configurations of class interests. Policy is endogenous.

I don’t think this is a counsel of despair. It is to say that the left and greens must campaign for the cultural change without which degrowth is impossible. The precedent here is perhaps free market ideas in the 50s and 60s. These were marginalized, but years of often-neglected work by campaigners and thinktanks eventually led to them becoming accepted in the 80s. You can do a lot of important political work without having power.

* The papers cited in this sentence are paywalled – hence the links to scihub. Yes, there is irony in this fact.

** I am perhaps unique in believing that the decline in interest in market socialism is one of many intellectual wrong turns we have made in recent years.

My articlesMy books
Follow on:
Previous Government spending, profits & capitalism
Next The decline of economics