by
Blog Team
My articles My books
Follow on:
Summary:
At a European Council summit held on 17-21 July, EU heads of state and government reached agreement on a recovery package to tackle the socio-economic fallout from Covid-19. Using text analysis, Tatiana Coutto assesses how the deal was portrayed in southern European newspapers and how this coverage differed in the Dutch and German press.  European Council meetings periodically bring together the heads of state and government of EU members, but they do not usually arouse much interest beyond specialised media. The recent summit held from 17-21 July, however, received unusual coverage because of its ambitious objectives, its long duration, and because of the cleavage between the wealthy countries from the north and the indebted ones from the south. Accusations of a lack of solidarity and

Interview with Manmit Bhambra: “Young people throughout Europe have a more liberal, more open and inclusive sense of identity”

Turkey’s actions in the Mediterranean call for the projection of EU power, not mediation

Conflict in Nagorno-Karabakh: The Azerbaijani perspective on the route to peace

At a European Council summit held on 17-21 July, EU heads of state and government reached agreement on a recovery package to tackle the socio-economic fallout from Covid-19. Using text analysis, Tatiana Coutto assesses how the deal was portrayed in southern European newspapers and how this coverage differed in the Dutch and German press.

European Council meetings periodically bring together the heads of state and government of EU members, but they do not usually arouse much interest beyond specialised media. The recent summit held from 17-21 July, however, received unusual coverage because of its ambitious objectives, its long duration, and because of the cleavage between the wealthy countries from the north and the indebted ones from the south. Accusations of a lack of solidarity and fiscal irresponsibility had ruffled some feathers in previous online meetings, which rendered the negotiations more salient for domestic audiences.

For various European leaders, the agreement reached at the summit was a historical achievement for their countries and for Europe. Italian, Spanish and Portuguese heads of government were visibly satisfied with the outcome. But did the press echo this opinion? Manual and computer-assisted analysis of EU Council coverage helps us understand southern Europeans’ views on the summit, the other member states and the EU.

The marathon Council, in President Charles Michel’s words, resulted in a comprehensive package of over €1.8 trillion, combining the 2021-2027 financial framework (MFF) and the new recovery instrument, which has been labelled Next Generation EU (NGEU). The political impact of the plan is considerable as it deepens economic integration and brings back the idea of ‘ever closer union’.

The agreement allows leaders to claim success in the negotiation process so they do not ‘lose face’ at home, which is vital for the approval of the text by national and European parliaments. Enthusiasm for the agreement has varied, but leaders left Brussels satisfied (and relieved). Emmanuel Macron highlighted Franco-German leadership and the preservation of the French agriculture budget. Giuseppe Conte praised the ‘unprecedented’ volume of resources received by Italy. Greek PM Kyriakos Mitsotakis described the compromise as a ‘leap into the future’.

The self-declared ‘frugals’ (who are net contributors to the EU budget) succeeded in keeping their rebate and including mechanisms against the risk of misuse of tax payers’ money by southern Europe. Hungary and Poland were happy with the vague provisions regarding violations of the rule of law. Put simply, everyone had a good story for the press conference. But have newspapers shared the enthusiasm of state representatives? How have they perceived the negotiations?

Table: Number of articles per outlet and their average length

I first manually examined the wording of a sample of 60 articles in order to identify the issues and terms that received more visibility during the summit. Based on this initial survey, I constructed a dictionary – a set of word-based indicators used to search texts – containing the most relevant terms used to report four key aspects of the negotiations: impasse, progress, defeat and victory/success. A second dictionary contains terms related to the five main topics evoked during the Council. Computer-assisted content analysis (CA) of the texts using free R software was used to perform an exploratory quantitative assessment of online coverage of the European Council by mainstream media. The textual data was translated into English using googleLanguageR software.

Unsurprisingly, public health issues received extensive coverage (except in the NRC), most notably in France, where Macron suffered outspoken criticism over the management of the health system. Environmental issues (including the Green Deal) were more visible in the French, Italian and Spanish cases, where the relationship between the recovery package and the improvement of environmental conditions was highlighted. However, a closer look at the government’s declarations and quotes from experts is needed to determine the reasons for the different accounts observed in the Dutch, German and Portuguese newspapers. Unemployment and the obligation to pursue job market reform (as in Spain) remained a concern of the south, although the issue remained secondary in the coverage of the summit.

Figure 1: The main topics mentioned in newspaper coverage of the summit 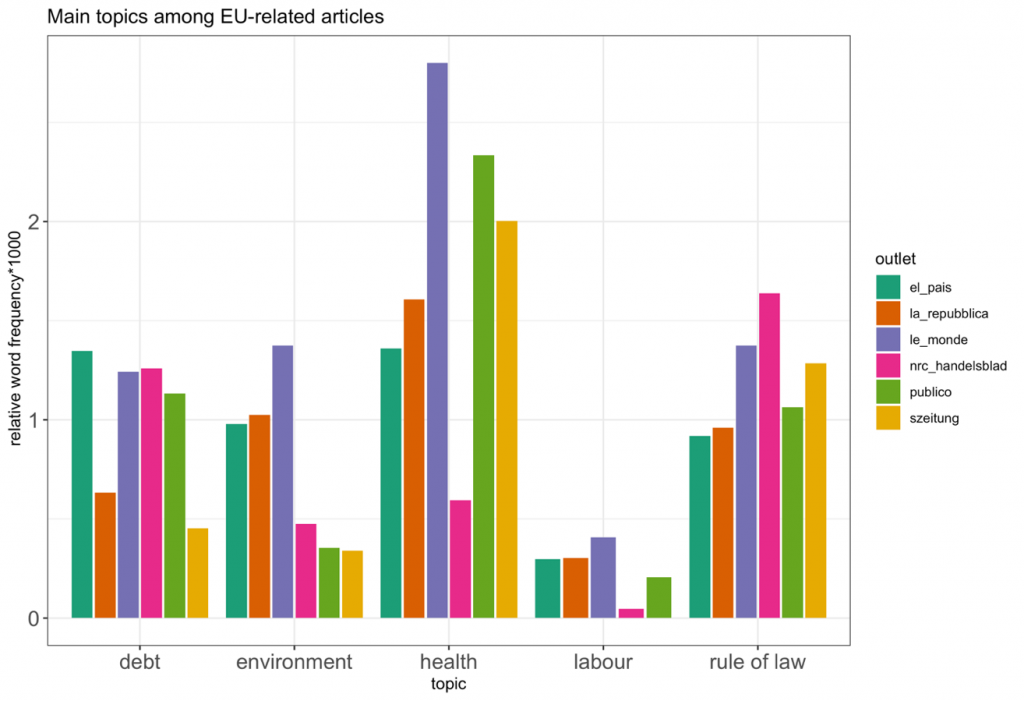 Despite the control mechanisms exerted over public expenditure – including an ‘emergency brake’ secured by Dutch PM Mark Rutte – southern European online press focused on the successful aspects of the negotiations such as debt mutualisation. They also used terms such as ‘triumph’ and ‘historical achievement’ more frequently than other newspapers. This trait is particularly strong in La Repubblica, which reproduced Conte’s enthusiasm for the determined manner with which Europe helped ‘Italy protect its dignity’.

The language used by Público, Süddeutsche Zeitung and Le Monde had more terms related to the progress of the negotiations. The Portuguese outlet reported the compromise reached with the frugals. The preservation of the resources foreseen in the initial proposal and the possibility of using these for regional development were regarded as a victory. The printed edition, however, made no reference to the summit on its cover, apart from a small comment about the Netherlands being ‘against everyone in a Council whose outcome was uncertain’ on 18 July. To Le Monde, the position of the frugals eroded European solidarity, a term frequently used in the French media in general.

NRC provided a less passionate account of the summit, although its print edition extensively documented the negotiations. The 18 July edition highlighted the convergence among EU leaders; the 21 July cover describes the agreement as historical, followed by Rutte’s declaration that Dutch interests had been safeguarded by a ‘good package in which Europe becomes stronger’. The higher salience of the ‘defeat’ aspect had less to do with the grants transferred to the south than with the weakening of the principle that a violation of the rule of law is a sufficient condition to trigger the emergency break – a topic on which NRC insisted throughout the summit.

Figure 2: How the negotiation process was portrayed in the media 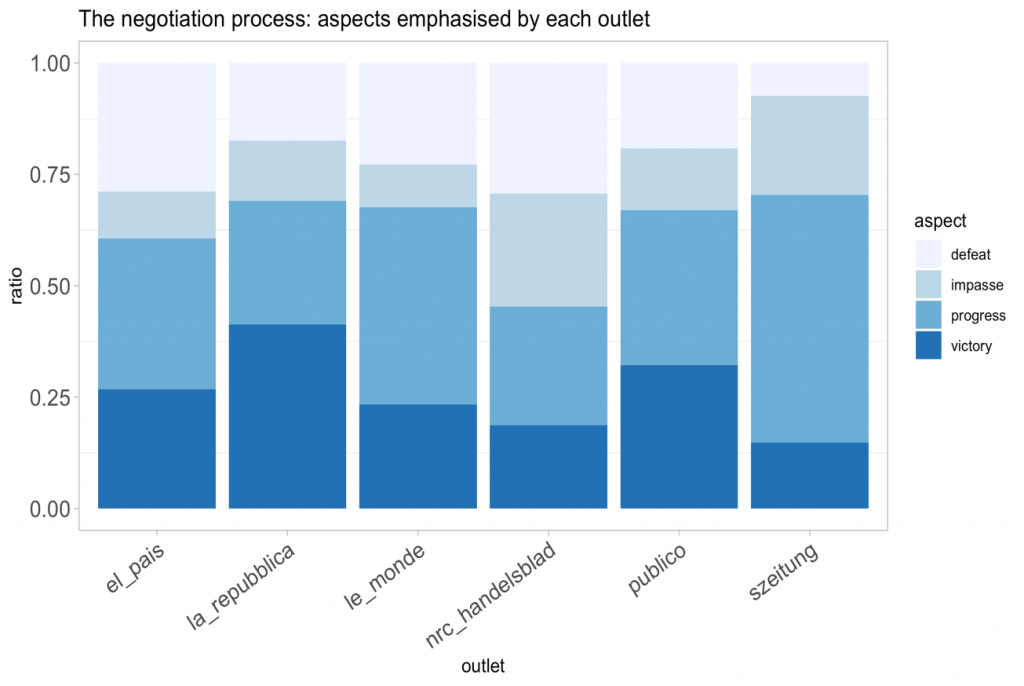 The pandemic prompted ‘extraordinary measures for extraordinary times’. Germany’s change of heart regarding joint borrowing and the Franco-German initiative for European recovery have proved pivotal in this process. Communication, nevertheless, was key for good (and sometimes legitimately critical) coverage of the summit. Public opinion on EU affairs is not stable and is easily influenced by new information, which makes the media a powerful political actor.

While meetings were carried out behind closed doors (and terraces), various leaders provided journalists with daily briefings of the negotiations. By doing so they had more control over the narrative of the meetings, reducing the space for dissident voices, most notably the most radical opposition parties. In that sense, member states acted not only as the gate-keepers of integration but also the gate-keepers of its account.

Note: This article gives the views of the author, not the position of EUROPP – European Politics and Policy or the London School of Economics. Featured image credit: European Council

Tatiana Coutto – Sciences Po
Tatiana Coutto is a Marie Curie Fellow at the Centre for European Studies and Comparative Politics (CEE) at Sciences Po. Her research interests include the relationship between the media and public attitudes toward European integration and analysis of textual data.

My articlesMy books
Follow on:
Previous Rethinking immigration as an issue in the European Union and its consequences for government accountability
Next Disrupting supply chains: Why leaving the Single Market means systemic breakdown