Home / London School of Economics / Group collapse and strategic switching: Why MEPs change their affiliations in the European Parliament

Group collapse and strategic switching: Why MEPs change their affiliations in the European Parliament

B. T. 14 days ago London School of Economics

by
Blog Team
My articles My booksMy videos
Follow on:
Summary:
It is relatively common for MEPs to change their political group in the European Parliament, but what explains this behaviour? Drawing on a new study, Aaron R. Martin writes that while group switching is often assumed to be a strategic choice, over half of the switches that took place in the European Parliament between 1979 and 2009 were non-strategic moves triggered by the collapse of an existing group. Across the first seven European Parliament terms, around 10% of members changed their labels, a frequency of party group switching that is significantly higher than in most national parliaments. Therefore, it is pertinent to ask: why have MEPs switched party groups so often? The answer to this question is deceptively simple. As I show in a recent study, party group collapse caused


B. T. writes Populism and Covid-19 in Europe: What we learned from the first wave of the pandemic

B. T. writes Who will lead Bulgaria’s next government?

B. T. writes How the EU’s fiscal rules should be reformed

B. T. writes Does Covid-19 spell the end for regional integration? Comparing Latin America and the EU in the age of vaccine nationalism

Populism and Covid-19 in Europe: What we learned from the first wave of the pandemic

Who will lead Bulgaria’s next government?

Book Review: A Philosopher’s Economist: Hume and the Rise of Capitalism by Margaret Schabas and Carl Wennerlind

It is relatively common for MEPs to change their political group in the European Parliament, but what explains this behaviour? Drawing on a new study, Aaron R. Martin writes that while group switching is often assumed to be a strategic choice, over half of the switches that took place in the European Parliament between 1979 and 2009 were non-strategic moves triggered by the collapse of an existing group.

Across the first seven European Parliament terms, around 10% of members changed their labels, a frequency of party group switching that is significantly higher than in most national parliaments. Therefore, it is pertinent to ask: why have MEPs switched party groups so often?

The answer to this question is deceptively simple. As I show in a recent study, party group collapse caused over half of the switches in the European Parliament between 1979-2009. Party group collapse occurs in three different ways. First, if incumbent members cannot rally enough support to reform their group using the same label following a European election, then I refer to this as the failure to reconvene (FTR). Second, if a group label disappears during the middle of a session, as observed in the cases of several technical groups, this is a dissolution. Finally, a merger occurs when 100% of the group members take on the same, new label. Table 1 lists all cases of group collapse during the first six sessions.

Note: The numbers shown in ‘EP Founding Session’ and ‘EP Collapse Session’ indicate the parliamentary term in which a group was founded and collapsed. For example, the CDI group was founded during the first European Parliament term (1979-1984) but failed to reconvene (FTR) in the second European Parliament term (1984-1989), therefore the founding session is indicated as 1 and the collapse session is indicated as 2. For all groups that failed to reconvene, the values in the table for seat share and effective number of parties refer to the pre-collapse session. Only those groups whose collapse affected members between 1979 and 2009 are included in the table. The names for each group are: Group for the Technical Coordination & Defence of Independent Groups and Members (CDI); Group of European Progressive Democrats (DEP); Group for Technical Coordination & Defence of Independent Groupings & Members (TCDI); Communist and Allies Group (COM); European Democrats (ED); Group for the European United Left (GUE); Left Unity (CG); Technical Group of the European Right (DR); Forza Europa (FE); Rainbow Group (RBW); Group of the European Democratic Alliance (RDE); Europe of Nations Group-Coordination Group (EDN); Group of Independents for a Europe of Nations (I-EDN); Group of the European Radical Alliance (ARE); Technical Group of Independent Members-Mixed Group (TDI); Union for Europe (UPE); Europe of Democracies and Diversities (EDD); Identity, Tradition, and Sovereignty Group (ITS).

When a party group collapses, all members are forced to switch into either a viable group or the non-inscrits, no matter their preferences. Therefore, group collapse triggers non-strategic switches, i.e. label changes that are not primarily driven by policy-seeking, office-seeking, or vote-seeking behaviour. Alternatively, strategic switches are independent of group collapse and are undertaken by ambitious MEPs, or delegations, who intentionally change labels in pursuit of coveted offices or increased policy influence.

To explain the frequency of switching in the European Parliament, therefore, it is necessary to account for weak party group institutionalisation and group collapse as well as strategic and non-strategic switching. The theoretical framework presented below in Figure 1 identifies four possible scenarios. Strategic out-switchers may exacerbate the instability of weakly institutionalised groups, leading to either a (non-strategic) dissolution or a (strategic) merger. Alternatively, groups having traits associated with weak institutionalisation may either dissolve or negotiate a merger.

Weakly institutionalised groups should be small, young, and dependent on dominant delegations. Most interestingly, I expect that these same characteristics should be related to group collapse. I test this hypothesis with a series of t-tests, and the results show the expected relationship – collapsing groups are more likely than non-collapsing groups to have fewer members and national parties, to have less experience, and to be concentrated around one or two delegations. Of the collapsing group types, those who fail to reconvene are the largest, dissolvers the least experienced with the smallest seat share, and mergers have the most tenure and lowest number of effective parties. These findings show that, not only is weak institutionalisation correlated with collapse, but different types of disintegration correspond to different constellations of group traits

I identify examples of all four scenarios derived from the theoretical framework in the historical record. For example, when the Italian Democratic Party of the Left (PDS) switched into the Social Democrats (PES), this decision, based on the party’s shifting ideological preferences, triggered the collapse of the GUE group, and all of the remaining members were forced to find a new home regardless of their interest in policy or offices. This exemplifies how a strategic decision by a single delegation can cause a series of non-strategic switches.

Likewise, following the departure of the Spanish People’s Party to begin the third European Parliament session, the members of a diminished European Democrats (ED) eventually joined the EPP, a union that resulted in a tumultuous and unfulfilling marriage. Finally, the fusion of the Forza Europa (FE) and the Gaullist European Democratic Alliance (RDE), two groups highly concentrated around dominant delegations, represents an instance of weakly institutionalised groups negotiating a strategic merger.

Turning to the causes of strategic switching, my analysis builds on previous scholarship on this topic by hypothesising that members from larger European political groups (EPGs) or national party delegations (NPDs) should have reduced odds of switching. Because offices are distributed according to the norm of proportionality, I assume that members from EPGs with the highest seat share relative to the chamber or NPDs which control the most group seats should be less inclined to switch due to office-seeking. Alternatively, I hypothesise that, as MEPs or NPDs become more incongruent with their EPG, either on the ideological left-right or the pro-/anti-Europe dimension, their odds of switching should increase. The most important contribution, however, is the inclusion of the previously omitted group collapse variable, which should be highly significant and take a positive coefficient.

I use pooled logistic regression models where the outcome variable takes the value 1 if the MEP switched during a session. Two seat share variables are included. The first measures what percentage of the parliament each EPG controlled, and the second accounts for how many group seats the NPD held. I construct four distance variables using DW-Nominate scores. The first two measure the absolute distance from the MEP to the EPG’s median on the ideological left-right and the pro-/anti-Europe dimension. The second two measure the absolute difference between the NPD’s median to the EPG’s median on both dimensions. To aid in interpretation, all distances are standardised. 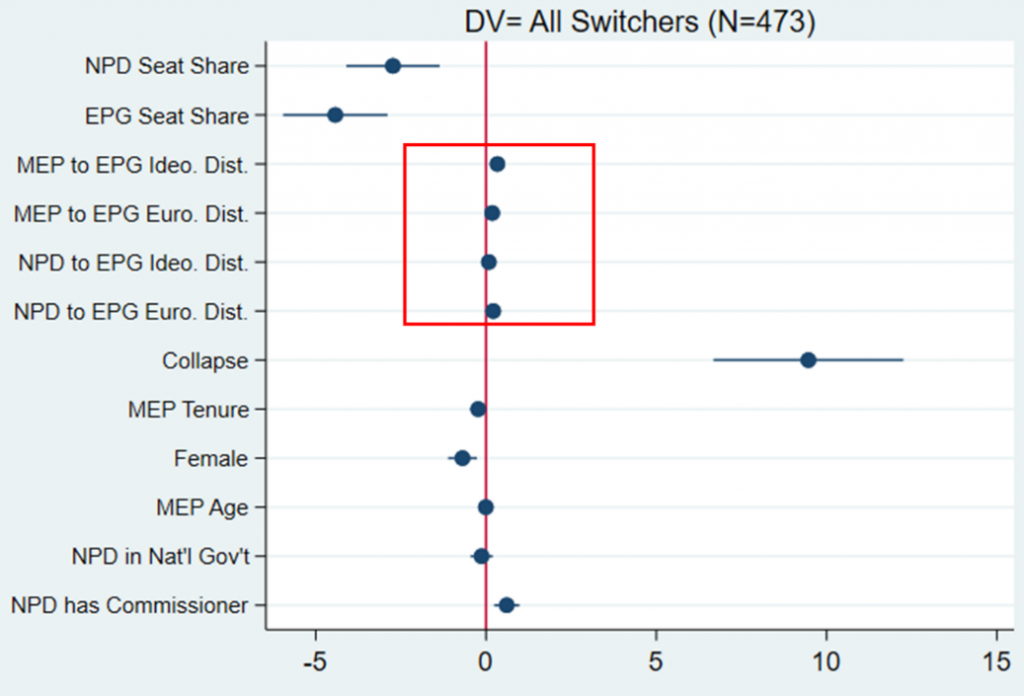 Note: The figure is based on pooled logistic regression models with a penalised maximum likelihood estimator. The unit of analysis is the MEP and the period covered is 1979-2009. NPD stands for national party delegation. NPD seat share measures how many seats each delegation controls in a group. EPG stands for European political groups. EPG seat share measures the percentage of parliamentary seats controlled by each group.

Figure 3: Plotted odds ratios for the four distance variables from the full model

Figure 2 presents the coefficient plots from the full model. As hypothesised, both seat share variables are negative and highly statistically significant. This means that members from the largest EPGs and NPDs have significantly reduced odds of changing group labels. All four of the coefficients on the distance variables are also positive, although only three are statistically different from zero. Figure 3 plots the odds ratios associated with these distance variables. A one standard deviation shift on the ideological dimension increases the odds of a strategic, individual switch by about 40 percent. A similar shift on the pro-/anti-Europe dimension for a delegation increases the odds of a switch by over 20 percent.

After controlling for collapse, therefore, we can see a relatively consistent set of relationships emerge. The largest groups and delegations deliver offices to their members, so as seat share increases the odds of switching decrease. Likewise, as policy incongruence increases, so do the odds of switching. This is true at either the member or delegation level and on either dimension.

To conclude, even though group collapse caused a majority of the switches during the first thirty years of the European Parliament, this variable has previously been omitted from any study of this topic. The benefits of controlling for disintegration are immediately noticeable, as the results of the analysis are consistent and confirm widely-held hypotheses found in the literature. Therefore, this article not only establishes a relationship between weak institutionalisation and group collapse, but it accurately estimates the effect of policy incongruence on increasing the odds of party group switching.

Note: This article gives the views of the author, not the position of EUROPP – European Politics and Policy or the London School of Economics. Featured image credit: CC-BY-4.0: © European Union 2020 – Source: EP

My articlesMy books
Follow on:
Previous Innovative, digital, green, smart: Setting out a new growth model for Central, Eastern and South Eastern Europe
Next The needs of disabled fans must not be ignored when sports stadiums reopen to spectators